The rides are back

Project: Visiting tours to the Abandoned Amusement Park of Artxanda.

Working party: A project developed by Saioa Olmo and Consonni and produced by Consonni with the collaboration of the Bizkaia Regional Government, the Basque Government and Arteleku-Gipuzkoa Provincial Council.

“The rides are back” is a project that uses a contemporary ruin, Artxanda Amusement Park, and the guided-visit format, to talk about the show and consumer society. The project claims the contemporary ruin as a resource that allows us to reflect on the past and the present of our social context. Also on the models of future we are projecting at the present in our cities.

The Amusement Park of Bizkaia was opened for the first time in 1974 and it was closed definitively in 1990. Nowadays, disappearing rides as the Ferry Wheel, the Rollercoaster, the Train Ride, the Octopus or the Crazy Worm, are known by intuition. The restaurant seems still active, there are trays ready for serving and scattered chairs all around with no logic … The fantasy sceneries are being occupied by the weeds. A space designed for entertainment, which has not any other usage is still alive having the attraction of the left thing as inducement.

Thirty-three years after the opening, Artxanda Amusement Park revived from its lethargy. On September 14, 2007 there were Fireworks in Plaza Arriaga to celebrate the inauguration of the period of visits during October, 2007.

During October Thursdays, Friday, Saturdays and Sundays, the Amusement Park of Artxanda opened its doors for an occasional way to develop a few guided-visits to the 10 new attractions which were arisen spontaneously and were tracing a physical and symbolic trip:

The visits were an audience success, the 500 visit vacancies we offered were completed and unfortunately many people remained in a waiting-list. Therefore, we do not dismiss to any derivation of the project. 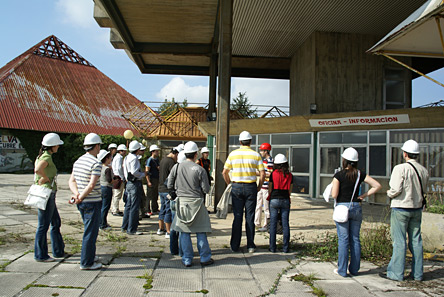