Project: Photographic file of the look of 35 women on the socio-cultural context in which they live. Campaign of communication and diffusion of the above mentioned perspectives.

Workin party: A project of Pripublikarrak commissaried by Xabier Arakistain for the exhibition “For all audencies ” in Sala Rekalde and sponsored by the Area of Women and Development of the City Council of Bilbao.

Optikak are 35 points of view, the reflections of 35 women who have been born or have lived in Bilbao.

Optikak was a project in which diverse women were invited to answering through photography and/or comments to 18 questions related to the context in which they live. Some of them were women who appear in the mass media, others without presence in them. Some of them were anonymous, others used their own names. Women answering through photographs, questions regarding to work, sexuality, the domestic space, the public space, the social ambience, the family, the perception of the future and some other questions of gender. They were very heterogeneous women, that were helping to present the subject “woman“ not as a monolithic category but as a changeable position (politics) depending on their social, economic, racial, sexual and cultural circumstances. Different ways of to come about woman. These are the questions that we raised:

The house – the domestic space

Optikak is 35 glances. Understanding woman’s visibility not as an observed object but as a subject that looks. It was not a question of numbering all the women and where are them, but to ask what is what they see from where they are.

This photographic archive was presented with a 10m long canvas that was gathering approximately 600 photographies and comments organized by authors and questions. It was possible to make different reading interpretations crossing different variables. Two videos were facilitating also these readings in a sequential way, and so capable of being watched in other spaces. Also, an image of each of these 35 glances became postcard, and arrived to a third of the homes of Bilbao. These postcards were an invitation to participate in the project. The appearance in the mass media and the web www.optikak.org completed the spreading of these points of view.

The produced material being presented in the exhibition “For all Audencies” of Sala Rekalde in Bilbao, was itinerating to different forums: the Fair of Women’s Associations of Bizkaia in the Arenal, the days on Good Practices in Matter of Equality ” From the theory to the facts ” organized by the Basque Parliament in the Palacio Euskalduna in Bilbao and in Espacio Bastero in Andoain in the “Me, Now” exhibition. 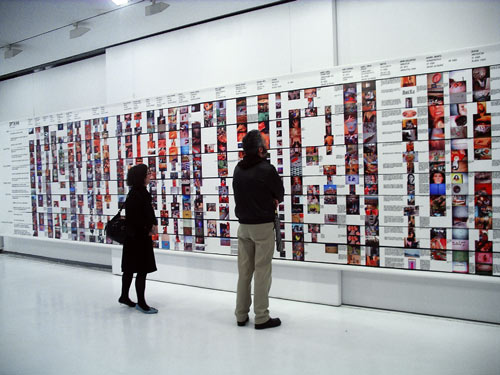