Project: Street-action to bring over the citizenship, ideas that had been discussed in the seminar “Generating: art, identity and gender in movement”.

Working party: A project of Pripublikarrak financed by Bilbao, Art and Culture Meetings of the University of the Basque Country.

The language organizes our way of thinking and most of the time we are not conscious about it. It affects on the way we think over ourselves and also in relation to the others.

Departing from the idea that the identities are something that are changing over the time and that they superpose one to each other, a Cocktellations action proposed a game to pedestrians: it was to make your map of identities, but instead of using nouns to describe you (refer to being something statical), using actions you develop (something dynamic that changes throughout the time). Thus, instead of saying I am sportsman or sportswoman, to say I practice the sport, instead of saying I’m a woman, to say I live as a woman, instead of saying I’m a farmer, to say I work the ground… Once every person had completed their map, we were changing this for a cocktail having the ingredients mixed according to the actions that they had noted. A personality ready to be drunk. All the maps were joining in a bigger canvas, so that people could see their cocktellations in relation to the others.

The action took place in 4 different places in Bilbao (opposite the City Council, Jardines de Albia, Plaza Circular and Arenal) and the van of Cocktellations was moving each of them itself. 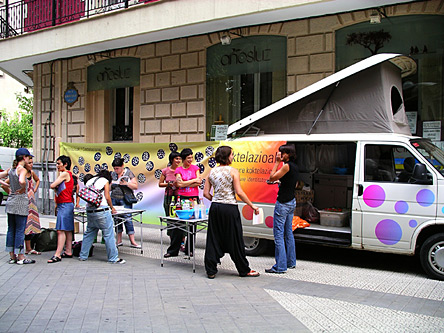