When: the 19th of September of 2009
Where: in the streets of Biella (Italy)
What: street action with the people of the city, using giant soap bubbles as resort for provoking conversations about our desires.
Who: a project managed by Saioa Olmo inside the “Unidee” residence program (Pistoletto Foundation), with the support of the Department of Culture  of the Basque Government. Carried out thanks to the help of Julia Staniszewska, Bona Park, Natalia Gil y Camille de Galbert.

“Bubbling Desires” is an action developed in the city of Biella (north of Italy). Biella is a town whose economy is centered on the industrial production of textiles of wool. Nowadays, even when this sector is in crisis, it is still the main activity of the region.

In the streets of Biella we started the action of creating giant soap bubbles as a strategy to strike up a conversation with the passer-byers, asking them about the aspects around them they would like to change or issues they would like to be different. We used soap bubbles as a metaphor of desires due to their lightness, their magical appearance and because you can give shape to them.

This project was a first approach to work about future scenarios, and to that end, we stood in a crowded area of Biella and carried out the action at three different spots of it. Most of the persons we talked with, asked for a better transport system, more jobs, more cultural activities, less problems with drug addictions and missed that people from Biella were more open-minded.

Afterwards, the pictures of the action and the expressed desires were presented at the « Unidee in Progress » open studios event, where these results were shared with the people from Biella. 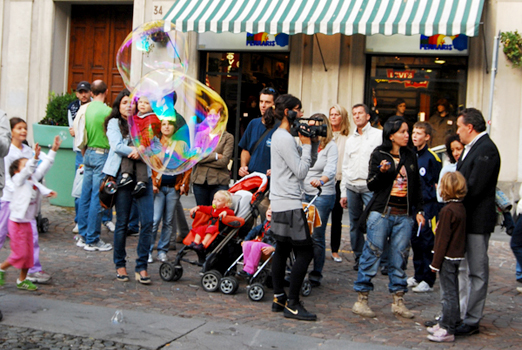 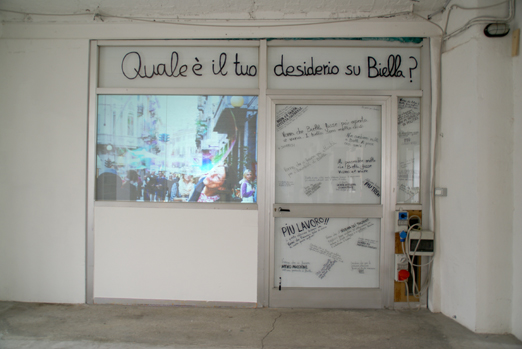