Where: Amadís Exhibition Space, Madrid. Visiting hours: from Tuesday to Saturday from 10:30 to 20:30, except Bank holiday.

Working party: A project by Saioa Olmo, produced by Injuve, for the exhibition “Injuve Design Laboratory” curated by Marcelo Leslabay.

EVANESCENT is a project that tries to create sensation of wideness in small spaces, through optical effects of light, color and perspective.  Its aim is providing a sensation of spaciousness thanks to wallpapers of gradient colors, which can easily be placed on the walls of a house.

Our houses are smaller and smaller. The space we live in, shrinks. The cities grow in density and the price of the m2  of the houses rises. The big spaces become a luxury and that’s why we try to give the most quality and versatility, to the few m2  we have at our disposal. Most of the times we cannot change the physical characteristics of the spaces but we can change the perception we have of them.

At a popular level, we know that dark colors set on the walls of a small space tend to make the space smaller and that, on the contrary, light colors give a sensation of wideness. That mirrors, depending on where they are placed, “extend the space” or that we get a smooth and uniform lighting bouncing the light against the ceiling.

We also know the use of gradients that arts have made through the history. Since the Renaissance the perception of two-dimensional surfaces suffered a revolution thanks to the introduction of the conic perspective in painting. The perspective-lines, the dimensions of the objects set in the foreground and in the background, and gradient colors in the horizon, are used to provoke an effect of distance in landscapes. Moreover, in mystic scenes, shining is placed behind the main figures to set them off the background, to hightlight  them or even to simulate that they were levitating.

Across the XXth century, artistic movements such as the Minimal Art, the Kinetic Art or the Op Art,  artists such as Vasarely, Kandinsky, Joseph Albers or Escher and theorist such as James J. Gibson or Rudolf Arheim have widely worked about it.

EVANESCENT, tries to rescue techniques of the arts’ field to the interior design, but not as if it was a figurative trompe l’oeil but as it was an abstract graphic resource that influences in our sensations and in our way of noticing the space.

EVANESCENT, as if walls banished. 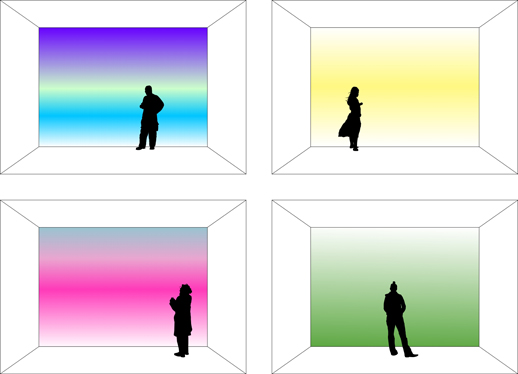