When: Sound presentation of the book “EROMECHANICS. The erotics of the social machinery” on Friday, 16th of February 2017, as part of Eremuak artistic program “Bi Dos Two”.
Where: In the Medialab2 of the library of Azkuna Centre, Bilbao.
What: Performances, book, sound installations and performative presentations about the libidinous fluxus of the social machinery.
Who: Developed by Saioa Olmo in collaboration with several persons in its different parts. The performances have been made with the EPLC colletive (Ixiar García, Nuria Pérez, Naiara Santacoloma, Maider Urrutia) + Iván Roy Batty. The book counts with the contributions of the following authors: Xabier Erkizia, Idoia Zabaleta, Diego del Pozo, Agurtzane Ormatza, Ainhoa Güemes, Nestor Makno and Javier de Rivera, and has been published thanks to a grant by the Culture Department of the Government of the Basque Country.
Thanks: Vicente Arlandis, Olatz de Andrés, Matxalen de Pedro, Txelu Balboa y Ricardo Antón, Mariajosé Aranzasti, Arantxa Lauzirika and Mawatress.

We are part of a social machinery regulated by several dispositives of control that work thanks to attraction and repulsion forces. A perfectly lubricated mechanism composed by piston rods, spark plugs, crankshafts, levers… and mostly, chains of transmission.

Eromechanic is an apparatus that adapt itself to each of the spaces and contexts in which it takes place, generating a specific development in each of them.

Performative presentation of the book Eromechanics, through the sounds, gestures and images that are created while interacting with it. 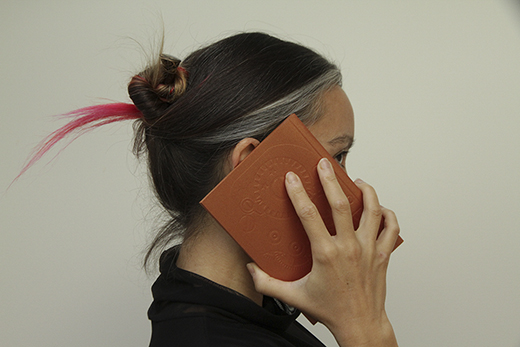 The “Eromechanics” book includes the dialogues of the performances; photomontages of each scene; texts by several collaborators: Xabier Erkizia, Idoia Zabaleta, Diego del Pozo, Agurtzane Ormatza, Ainhoa Güemes, Nestor Makno and Javier de Rivera, about the eromechanics of the sound, the performative, the art, sex, gender, activismo and social tecnologies, respectively; and images of the performances mad with EPLC collective. 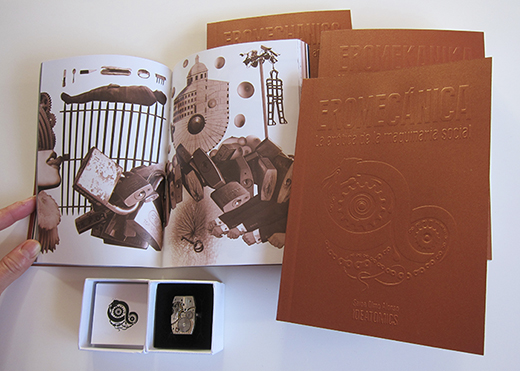 EROMECHANICS becomes more virtual than ever: the bodies turn into light impulses, words make into maps of audio-waves and emotions convert into simple variations of a chain of 0-s and 1-s. The performance in-person is replaced by a collective videocall. The space of representation is substituted by the intimacy of the home of each of the performers. The technological device marks the shape and way of relating among persons that wander through the different scenarios of the social machinery.

Wednesday, 5th of November 2014, as part of the MEM- International Festival of Experimental Art. To watch it live, from this website through the youtube channel and from Wikitoki. 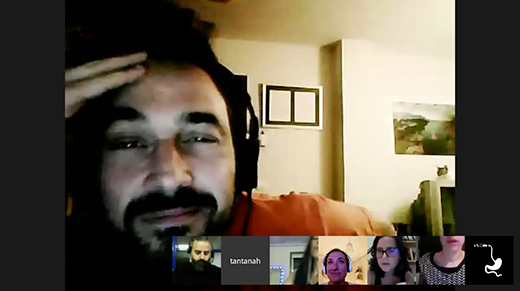 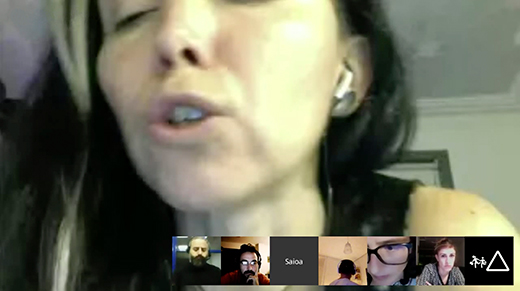 This time, Eromechanics takes the shape of a video. Several video-records made to the machines and artefacts of the exposed in the San Telmo Museum of San Sebastián are set in relation to the dialogues of the performance “Eromechanics”. This way the mixture of videos and speeches enables meanings, comparisons and relations, open to the creativity and interpretation of the spectator.

From the 24th of October 2014 to the 18th of January 2015 in the San Telmo Museum of San Sebastián, as part of the exhibition “Suturak. Cerca a lo Próximo”, and placed in the part of the museum related to the industrial period of the XXth century. 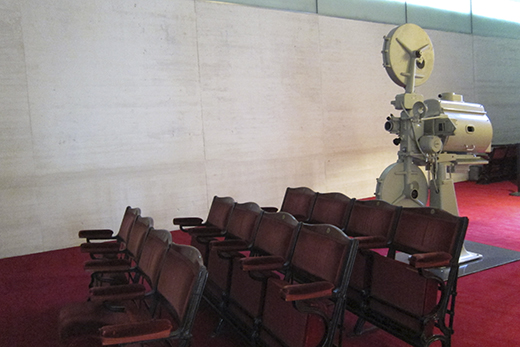 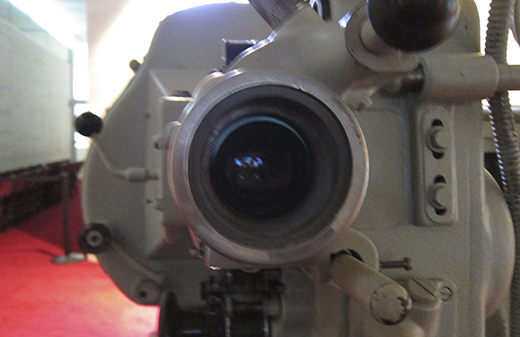 In this third edition of Eromechanic, ceremony, rituality and solemnity is used to tune the machine up. The own space and sonority of the church imposes rigour and parsimony. The iconic and symbolic part precedes to each of the situations presented, and the moving image establishes new unexpected connections with other machineries carefully saved by the San Telmo Museum.

14th of March of 2014, in the Church of the San Telmo Museum of Donostias-San Sebastián. 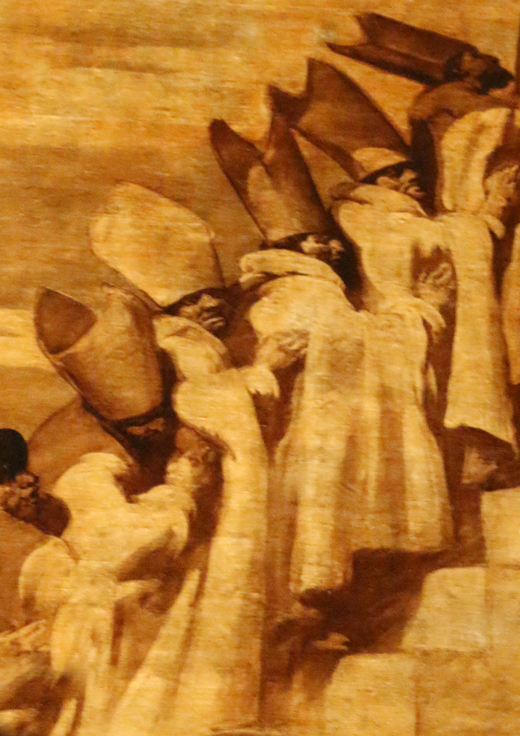 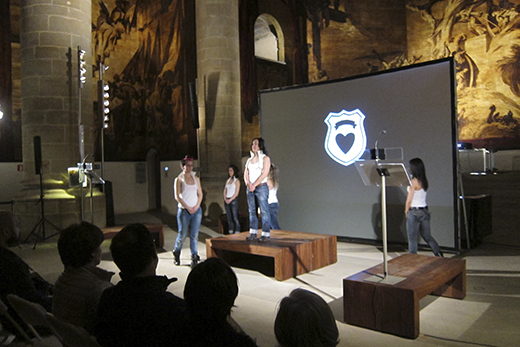 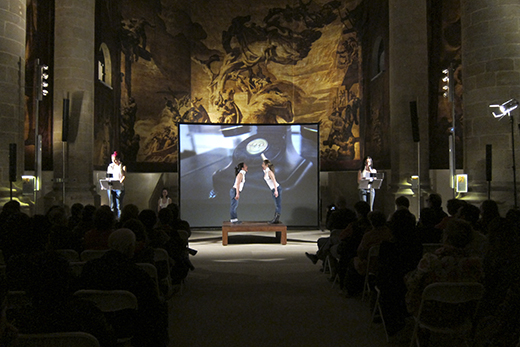 In this second delivery of Eromechanic, the distances become shorter and the points of vision are multiplied. Sensitive frisks, a spectorship arranged in a circle and the performers among the participants. On the other hand a new dispositive of control gets in action: the media.

31rst of January of 2014, in Izar Beltz Social Center of Bilbao. 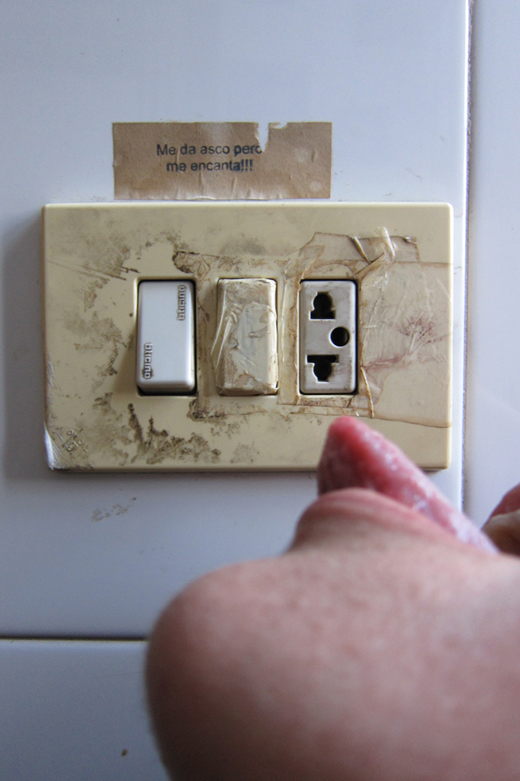 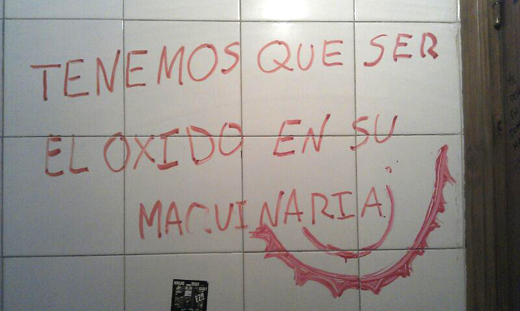 In this first presentation of EROMECHANIC, we slide our glance on the own walls and rooms of the building, recalling possible scenes of the previous life of the building as educative space, discovering its currents uses and introducing other behavioural situations in relation to erotism and the mechanisms of social control.

23rd of novembre 2013, in the old school of Lutxana (Bizkaia) during the Cultural Novembers of Plataforma Tirante. 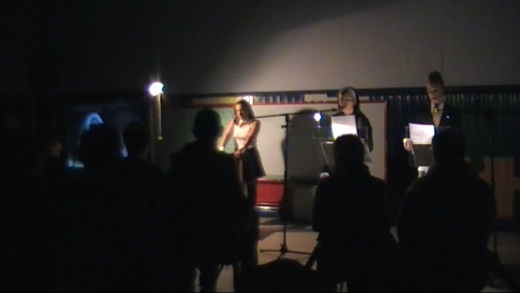 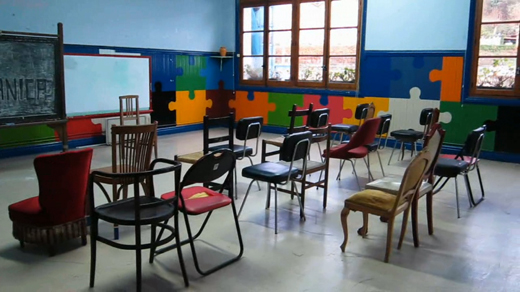