When: from 2000 to 2005 (the biggest communicative effort in October, 2004)
Where: Basque Country, Madrid, Gijón and another towns.
Project: Campaña de comunicación sobre la tardía emancipación de los jóvenes.
Working party: An original idea by the architects Alex Mitxelena and Hugo Olaizola, directed and developed by Saioa Olmo with the production and communication of Amasté Comunicación and the support of Arteleku-Gipuzkoa Provincial Council, Montehermoso Cultural Center, the Departments of Youth and Culture of the Basque Government, Madrid Abierto, Bilbotex and Euskadi Gaztea.
Web: www.emancipator.org

EMANCIPATOR BUBBLE is an inflatable bubble shaped living place; it has been constructed to be placed inside the house of your parents, which allows you to become emancipated without having to get out of the familiar house. You can connect the water, the electricity and the phone line directly to your parents’ house, so that there are no maintenance expenses. Thus, you can achieve a maximum comfort with a minimal effort. There are different EMANCIPATOR models and each one is adapted to each of the current youngsters’ typologies: the EMANCIPATOR DELUXE, which has the EMANCIPATOR-Card, with which you can make all the shopping for free, as it will be charged to the familiar account. The XXL model, which provides you 33% more of extra independence. The SEXMANCIPATÓN, ideal to take home your one night stand. The GARDEN, the ETHER, the FIRE-WIRE, the PUNCHETA, the AUTODETERMINATOR…

The project EMANCIPATOR BUBBLE consisted of a communicative campaign that was promoting this fictitious product. It used to appear as if it really was on sale in your most nearby department store but it never was commercialized. The aim of this communicative strategy was to create debate, reflection and attention on the late emancipation of the young people in our area. To raise what are the reasons for this still current, emancipation delay.  The high cost of the housings, the relation of interdependence of parents and children, an excessive fidelity to the serviceability of the young people of nowadays or a slightly promising independent future for the youth. To test what do the different parts involved in this conflict do (parents, children, institutions, mass media, affiliations …) against the mirage of an easy solution of the problem through the acquisition of a product such as EMANCIPATOR.

This communication campaign was spread through different promotional elements: chewing gums distributed in the streets with information about the product, a commercial advertisement shown in different television channels, commercial breaks in radios, the web page, the contest “TAILOR MADE EMANCIPATOR”, advertisements in different advertising supports (written press and displays in bars) and presentation sets in different centers of art and culture. The project also got a big coverage as news on television, radio, newspapers and magazines.

The project EMANCIPATOR BUBBLE had its biggest communicative impact in October 2004, having appeared in a lot of places before and after that date. We can remark some of the apparitions: participation in the Congress about Youth Politics in 2003 at Euskalduna Palace in Bilbao; action in Inmonorte Fair 2003; contest Madrid Abierto 2004; presentation kit in Sala Rekalde in Bilbao, in Montehermoso Cultural Center in Vitoria and in Koldo Mitxelena in San Sebastian; presentation in the First Meetings with the Imagination Society in the Conference Hall of Merida (2005); presentation in the exhibition “ Movable Sand ” in Gijón, together with the Meetings about Youth in Cabüeñes (2005); presentation in the Intrusive Zone in Mataró (2006); participation in the First forum about housing: “ Do you want to live? ” organized by United Space of the University of Oviedo (2007). 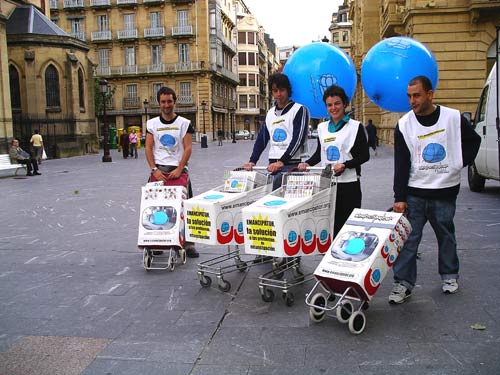