Project: Investigation on gender and work, and also tribute-event to the Artiach Cookie Factory farmer workers, as an example of fight in defense of the rights of the women in the labor field.

Working party: A project designed and carried out by Pripublikarrak as an order of the Area of Urbanism and Environment and the Area of Women and Cooperation to Development of the City Council of Bilbao with the collaboration of Arteleku- Gipuzkoa Provincial Council and Cofesa. Coordination: Saioa Olmo, Working field: Aiora Kintana and Communication: Maria Mur Dean.

The Urbanism Area of the City Council of Bilbao contacted the group Pripublikarrak to realize a tribute to the women who were employed as cookie-makers at the Artiach Cookie Factory. “Cookie makers. Active Memory”, is a cultural project that recovers the historical memory of the women’s union which symbolize the feminine work, the emancipation and the fight, creation of opinions, discussions and debates about the work of the women nowadays.

A project to remember and detect the women, that across their personal internal stories constructed also the History of the City of Bilbao. Women that have turned into an emblem of the industrial development thanks to their effort, work and claims meanwhile being employed at the Artiach factory, whose centenary was in 2007. In the “sirga”, the cod-fishers, the factories of jute fiber, braiding the hemp, sewing sails and at some other auxiliary industries of the naval activity, where most of the employed were women. It is a question of recognition of the work of all these women taking the cookie makers as an ensign.

“COOKIE MAKERS. Active memory ” started with the assumption of the cookie makers of an industrial society to update the speech and to look for “the cookie makers of nowadays”. Women who fight to achieve labor progress at present. It is a question, therefore, of a work that tries to delve into the past to activate the present. At the same time, it is being a project developing by women of very diverse disciplines and with concrete contributions. Thus, “COOKIE MAKERS. Active Memory” does not only visualize the work of the woman but it also generates it.

“COOKIE MAKERS. Active Memory”,  a tribute to the former workers of Artiach Cookie Factory that was materialized in an act in the former factory of Zorrozaurre.  A presentation of the book “Galleteras de Deusto. Woman and employment in the Industrial Bilbao” by the historians Maite Ibáñez and Marta Zabala, an audio-visual documentary about the workers, a sound installation and the projection of other videos about “woman and work” as “Sirgueras” by Jentilak collective, “The Cigar Makers” by Sirimiri Productions, “Amphibious Fictions” by Maria Ruido and “Derives from the precariousness of the feminine work” by Precarias a la Deriva. 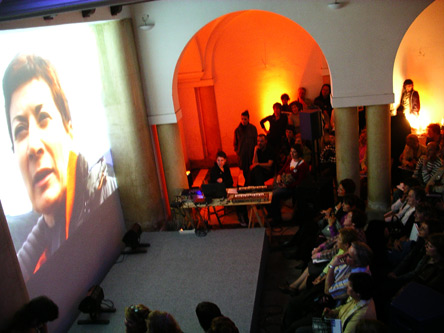