Project: Installation about Andoain and its representation forms in relation to EUSKADI Trademark work-line and produced to be a part of the exhibition “Label In&Out” in the Bastero Space in Andoain.

“Andoain 20140” was a project about Andoain and its representation forms. It was about what elements do allow us to refer to Andoain (its shield for instance, its ZIP code, its iconic architecture… ). It is also about the people in town, if they were being identified with them or they would propose others.

This installation used the shield of Andoain as a graphic sign that could serve as a starting point to reflect on identification aspects of Andoain. A video was made with interviews to people from Andoain in which the following questions were formulated:

Playing with the symbols and their meanings:

In the installation different elements were proposed, with which:

There were 3 alternative town representations inside the shape of the shield: the territorial one given by Google Earth, another from people’s collectives in Andoain, and another one presenting elements mentioned in the interviews to people from town. 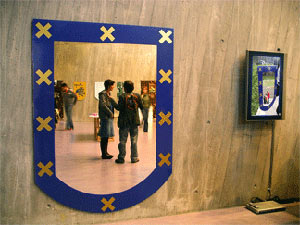 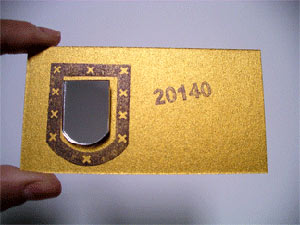